Extraordinary Meeting is a meeting hold once a year at the end of period to evaluate the “AD-ART” as known as the basic rules of this organization. The Election itself started right after the meeting had finished, the objective of the event was to choose the new president of the organization.

Extraordinary meeting held on December 6th, 2017. The sound of hammer knocked three times by the leader of the meeting (Presidium) declare the beginning of this meeting. The first thing discussed in this meeting is about the rules of the meeting. During the meeting, there are a lot of arguments and debate occur which make it difficult to reach an agreement, as the result the meeting itself took a day to finish. After the agreement has been reached, the next topic that discussed was about the responsibility report from all project manager in the previous period for 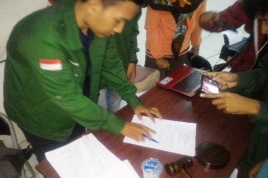 all division, and from the executive, however because almost everyone in the meeting that responsible to present their report were not ready at that time thus everyone agreed to discuss about Anggaran Dasar (AD) instead.

Figure 2: Signing of “AD-ART”
The meeting  also took a long time for Anggaran Dasar (AD) to be concluded in agreements. It took several days for AD only. The next topic of the meeting was to discuss about Anggaran Rumah Tangga (ART), however due to the responsibility report had not been discuss yet the participant agreed to do the presentation of responsibility report first. Every project managers, head of divisions, and the executive presented their responsibility report from previous period, it didn’t take a long time, it only took 2 days to finish this topic of the meeting. Moving on to the last topic of the meeting, the discussion of “ART”, because this topic is crucial to determine the future of this organization, thus every boards were trying to give their best advices, and a lot of argumments occurred which resulted for this meeting’s topic only it took days to finish. In the discussion of “ART” we were also discuss about the criteria of candidate for the next president. After all of the topic to discuss has been finished, the leader of this meeting (Presidium) close this meeting with three time knock of hammer. Overall for the Extraordinary Meeting took us 10 days to finish. The main reason this could happen beside the amount of debates and arguments which happen during the meeting is because the lack of participants that present on time at every meeting even when the plan is to start the meeting at 3 o’clock in the afternoon yet the number of boards whom attend are only a few, and the number start to increase at 5 to 7 o’clock in the afternoon and we agreed to  always stop the meeting at 11 pm, in that case we only have effective time three to four hours a day.

The candidate registration started one week after the extraordinary meeting, to register the candidates were demanded to prepare the required documents which include CV, KHS, and filling the registration form. For this year there are four boards registered to be the next candidate of SPE president, they are Samsul Bachri ,Shelty Pheronica Rana, M. Iqbal Rezza M and Achmad Fauzi. The election series are started one month after the extraordinary meeting finished. The election series are started on January 6th, 2018 at The New Benakutai Hotel, it started with candidates were being interviewed by SPE Balikpapan Section. In this session all of the candidates must present their vision and mission, and also their work program. After the presentation, the candidates were asked about some question that they need to answer, this session were done smoothly without any kind of problem.

After the sharing session, the event continued with the presentation of vision, mission, and work program from each candidates in front of all boards, in this session each candidate get 25 minutes to present and to answer all of questions from boards, the amount of questions asked shows that all of the boards want to choose the best candidate. After every candidate had finish their presentation, the next agenda was the election, the election started with the explanation about the election procedure by the Project Manager of extraordinary Meeting and Election, after that all boards were asked to leave the room and called one by one into the room to vote for their candidate, we did it this way to keep their privacy, after all boards had finished the voting, then the calculation  begun. One by one vote paper were open in front of all boards, after calculation of vote papers had been done thus this organization obtained the new elected president of SPE STT MIGAS Balikpapan SC, the title is given to Shelty Pheronica Rana whom being voted the most. After the announcement, there were last speech from previous president and first speech from new elected president, after both finished, the symbolic appreciation were handover from Moh.Dikin Adiwena as the previous president to Shelty Pheronica Rana as the new elected president.

After all those events ended, 2014 batch were given surprise by demisioners from 2015, and 2016 by a short video as appreciation and farewell to the 2014 batch, there also memorable parting gift has been given. In this final session we also shared about our feelings working together in the previous period there was a lot of tears, however at the end it was a happy end. We closed the event with the last family photo. 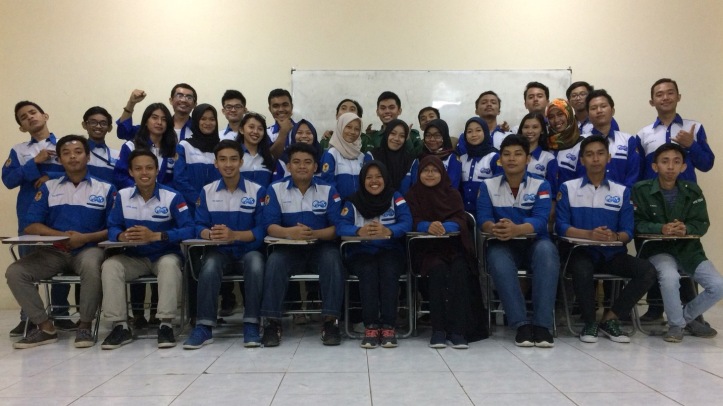